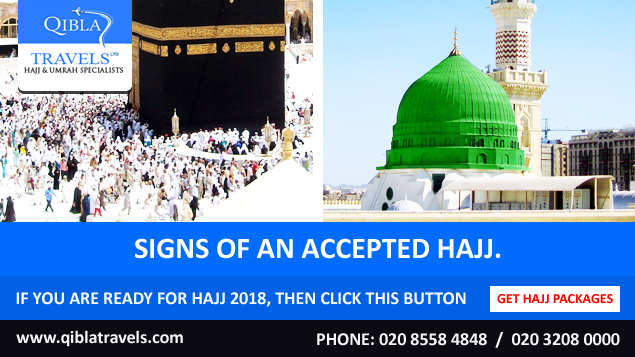 When the pilgrims return to their home countries after the journey of Hajj, they return spiritually refreshed, forgiven of their sins, and ready to start living a new, with a clean slate. Family and community members often prepare a celebration to welcome pilgrims home and congratulate them on completing the journey. Those who have performed the Hajj are often called by an honorific title, “Hajji,” (one who has performed the Hajj). We are telling here some Signs of an accepted Hajj.

According to the Qur’an, “…Pilgrimage to the House is a duty owed to Allah by all who can make their way to it…”(Aal ‘Imran, 3:97). According to a hadith narrated by Abu Hurairah (may Allah be pleased with him), the Prophet (peace be upon him) said, “The Umrah to the next Umrah is a kaffarah (expiation) of all sins one commits between them, and an accepted Hajj (al-Hajj al-Mabroor) is a supreme action, the reward for which is paradise.”

He also said, “Verily there shall be no reward for a Hajj Mabroor (an accepted Hajj) except Jannah (the Paradise).” (Bukhari, Muslim)

How fortunate are these souls who are blessed with the following words from the Prophet (peace be upon him): “Whoever performs Hajj for the pleasure of Allah and therein utters no word of evil, nor commits any evil deed, shall return from it (free from sin) as the day on which his mother gave birth to him.” (Bukhari, Muslim)

Mind you, there is a particular significance to each of the modes of worship in Islam. The significance of establishing Salah (prayers), for example, is to remember Allah (SWT). “…And establish Salah (prayers) to remember Me” (Ta Ha, 20:14). The significance of observing Siyam (fasting) is to cultivate Taqwa (God-consciousness) in oneself. “O you who believe, fasting is prescribed for you, as it was prescribed for those before you, so that you may be conscious of God” (al-Baqarah, 2:183). Likewise, the significance or essence of Hajj is making sincere repentance to Allah (SWT) and seeking His forgiveness.

The pilgrims should focus their attention toward certain points, which are necessary and of utmost importance and which many pilgrims ignore because they are unaware of their significance.

First of which is his sincerity. The sincerity of intention should remain even after the performance of Hajj. There should be no pomp or show.

Many people adopt the habit of talking frequently about their journey in order that people may come to know of their Hajj. They talk about the expenses incurred in the way of Allah, their charity amongst the poor and the needy, their devotion and worship, they are assisting the weak and old, etc.; This is a deceit from Satan who ruins the devotion without the person even knowing it. It is therefore of great importance that the pilgrim does not talk about his Hajj without necessity as it may lead to ‘Riyaa’ (show, insincerity). However, if the necessity arises and one must talk about his Hajj then he is at liberty to do so. But, he must not indulge in this type of conversation unnecessarily.

How can one know whether one’s Hajj is accepted?

The basic sign of a ‘Hajj Mabroor’ or an ‘accepted Haj’ is that upon one’s return, his life changes from worst to good. He becomes totally punctual in fulfilling the commands of Allah Almighty. His love and inclination toward the Hereafter increases and love for the worldly pleasures decline.

Among the signs of an accepted Hajj include:

If you are planning for Hajj, then you are in the right place. Qibla Travels Ltd is one of the leading and trustworthy Hajj and Umrah travel agency company in the UK. Please contact us without any hesitation and book your Hajj packages for the journey of life. Call Us ***020 8558 4848***