The Immense Reward of Umrah During Ramadan 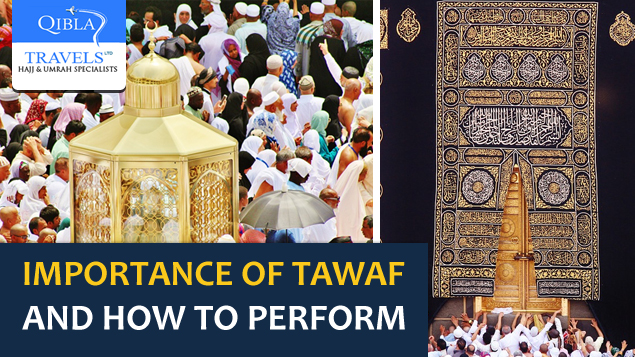 Tawaf is an Arabic word, derived from the verb “Taafa” which means to encircle something. One of the principal rituals of pilgrimage that every pilgrim must have to perform to complete his Hajj or Umrah. The key part of pilgrimage incorporates circumambulation around Holy Kabah seven times in a counter-clockwise.  The starting and ending point of Tawaf is Hajra al-Aswad (Black Stone). The encircling is believed to exhibit the solidarity of worshippers in the Ibadah of One God, as they revolve supplicating to Allah forgetting their status, race, cast or country. All are believers of One God!

Importance of Tawaf During Hajj and Umrah:

From tiny atoms to the massive galaxies everything in the universe is in a circular motion or in the state of Tawaf. Million and billions of star turn around the center of galaxies at bewildering speed as they’re in a hurry to turn towards their Creator. In Surah Yaseen Allah SWT says; each swims along in a circle. Pilgrims performing Tawaaf seems like millions of stars turns to their Supreme Creator. Those who start their journey to get this blessed chance to circle around the Kabah and join the ocean of believers considered themselves lucky enough. Prophet SAWW said;

“Whoever performs Tawaaf around the Allah’s House seven times and keeps track of it; it is similar as he freed a slave”.

The Best Type of Ibadah:

Other than the obligatory Salah, Tawaf is the best form of ibadah in Holy Haram. Muslims follow the Sunnah of our beloved Prophet PBUH and perform a Tawaaf of Kabah. It is performed as a greeting to the Holy Mosque, when Allah SWT invites his lowly man to His home, as it is an act that depicts the utmost respect and love for God.

Encircling around the Kabah signifies the idea of oneness and that everything revolves around the Allah Almighty. To understand the deeper meaning of Tawaf one can observe the Earth how it revolves around the Sun and depends on its light for survival. Just like the true believer who needs light and guidance of His Creator for survival. When we explore its impact on an individual soul, it has even deeper wisdom. Earth and Sky have seven layers and man has seven souls. Each circle around the Kabah symbolizes a phase. Each time pilgrim completes the circle he elevated his phase and after completing seven circles he reached to the seventh sky, above the material realm. From Nafs Al-Ammarah to Nafs Al- Mutmainnah, rises from his lowest step of the soul to the highest one.

Here are the seven types of Tawaf

How to Perform Tawaf?

In order to perform Tawaf, the pilgrim must be in the state of Wudhu and clean from all physical impurities. During Tawaf male pilgrim’s right shoulder must not be covered and for the first 3 rounds, they need to adopt ramal and walk normally in the remaining four rounds. Women don’t need to adopt Ramal, they can walk normally in all seven circles. Kabah should be on the left of the pilgrim.

Start your Tawaaf from the Hajra al-Aswad, kiss the sacred stone if possible but do not shove or create a disturbance to do so. If you’re unable to touch it because of the crowd, face the Hajra al-Aswad from the Tawaf line and gesture towards it with your right hand once. Now say “Bismillahi wallahu Akbar” and precede your first circle in an anti-clockwise.

Pilgrims can supplicate, made duas, do zikr and recite Holy Quran as they wish. Keep moving, if you feel Hungary, thirsty or need to go to the bathroom there’s no harm. You can free yourself and then continue your Tawaaf. Men adopt ramal for the first three rounds and only required in Umrah Tawaaf and Welcome Tawaf. For all seven rounds, women can walk at a normal pace.

At Rukn-al-Yamani or Yamani corner, touch it with your right hand and again say “Bismillahi wallahu Akbar”. Touching it is not mandatory if you can easily touch it do so but perhaps you’re performing on the upper level of the mosque or there’s is a big crowd then you can continue with your Tawaf. Do not point it or kiss your hand or say anything. It is Sunnah to say the following from Yamani corner to Black Stone;

You’ve completed the one round when you reach to the Black Stone. Continue the same procedure and complete all seven circuits. Once you complete the seven rounds cover your right shoulder if this was a Welcome Tawaf and Cheap Umrah Packages. Next pilgrims need to move towards the Maqaam e Ibraaheem while reciting the following Quranic verse;

Next, stand in a way so that the Maqaam e Ibraaheem lies between you and the Holy Kabah. Here offer two Rakat Salah, according to the Sunnah recite Surat Kafirun after Surat Fatiha in first rakah and Surat Ikhlas in the second rakah. In case you didn’t get space to offer two rakats at Maqaam e Ibraaheem, you can pray t anywhere else in Haram.