Hajj And The Universal Messages It Conveys

10 Reasons Why Your Supplications are Unanswered

Umrah – A Spiritual Journey For Life

In Islam, there are different forms of worship. The mandatory one is in the form of Salah that a Muslim has to learn Namaz and offer five times a day, other than that there is the recitation of Holy Quran, the voluntary prayers, the keeping of fasts and the most renowned of all – the Pilgrimage or Hajj. The last is among the most renowned pillars of Islam and has become a representative Muslim congregational prayer. 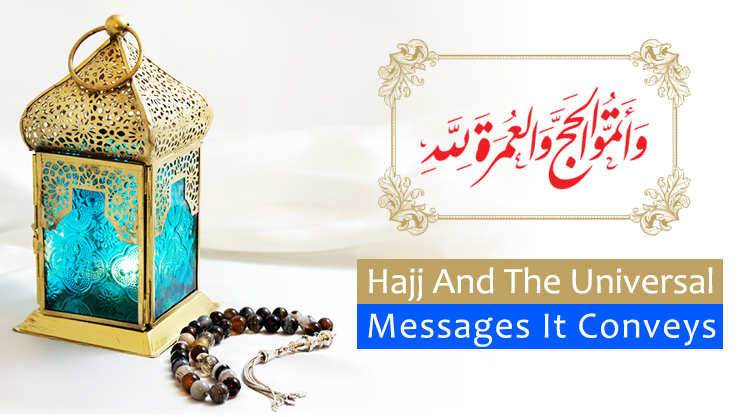 Hajj is the fifth pillar of Islam. It is mandatory upon every Muslim who is financially and physically able to perform it. It is one of the greatest and biggest congregations in the whole world. This is performed in the month of Zil-Hijjah. Besides being just a mandatory prayer or a form of worship, The greater universal messages of Hajj is Unity and peace. The lines below discuss the different messages that Hajj embodies that carry a universal appeal.

One of the major problems of the world of today is the gender-based discrimination where women are considered the lesser being and men are considered the prime being. This discrimination can be seen at even more prominence when it comes to the role of women in religious rituals and prayers. Offering prayers and being religious by performing the rituals is primarily considered as the duty of man and women are only marginalized to the stereotypical role of performing the chores of the household. The ritual of Hajj challenges and rejects this stereotype and shows to the world that when it comes to performing a religious ritual which is as crowded and as humungous as Hajj, women are equal to men and the performing of Hajj carries equal religious reward for them as it does for men. In Quran Allah Almighty says:

From this ayah, it is clear that performing of Hajj carries equal reward for women as it carries for men. Therefore, the stereotype that men can go for the religious rituals and obligations is refused in the ritual of Hajj.

Another factor that brings about the importance of women in Islam with regards to the festival of Hajj is the fact that it involves a ritual of Sa’I, which means striving. This ritual is in commemoration of Hazrat Hajra (RA) who strived between Safa and Marwa Mountain in search of water for her son Ismail (AS). This act of hers was so liked by Allah Almighty that He made it a compulsory act for the ritual of Hajj. Therefore, this also gives us the message that in Islam both men and women are equal when it comes to their standing in the court of Allah, especially in the context of religious reward. Thus, this equality in reward carries a universal appeal to all the women of the world who think that religion is only for man.

One of the major objectives of the Islamic teachings is to bring humility among the followers. The first level is of the humility in front of Allah and the second is the observance of humility. The ritual of Hajj helps achieve both these levels.

Firstly, pertaining to the humility in front of Allah Almighty, Hajj is perhaps the best example of submissiveness to Him. Muslims from world travel towards the house of Allah and do whatever Allah has commanded in this ritual to do. Moreover, the famous ‘Labaik Allahuma Labaik….” Tasbeeh which the pilgrims recite clearly shows the submissiveness of Muslims towards their Lord and their acknowledgment of the fact that only He is the Lord who deserves worship.

Secondly, during the rituals of Hajj, the humility within the Muslims also surfaces. Muslims that may take pride in their ethnicity or social standing forget it all and during Hajj they stand and perform rituals with all other fellows Muslims who might belong to a different social, cultural and economic background. Thus, Hajj gives the universal message of humility to all those who search for it.

We live in a world of stress and in this world. Every one of us wants a life where there is little trouble and we could live the life with peace. Achieving inner peace is easier said than done. However, for a Muslim, the achievement of inner peace is simple as it is based on the remembrance of Allah. The more a Muslim remembers Allah, the more he or she achieves peace. Moreover, the reward associated with the remembrance of Allah Almighty is another factor that gives inner peace to a Muslim. In this regard, the following hadith can help achieve that inner peace which is so universally desired:

“(The performance of) Umrah is an expiation for the sins committed (between it and the previous one). And the reward of Hajj mabrur (the one accepted by Allah) is nothing except Paradise.” (Bukhari)

Therefore, for Muslims around the world. Performing Hajj is something that brings inner peace to them and grateful for what Allah has given them.

“We created you from a single pair of male and female (Adam and Eve) and made you into nations and tribes that ye may know each other and not that you might despise each other. The most honored of you in the sight of God is the most righteous of you.” (49:13)

From this ayah of Quran. It clear that in the eyes of Allah all humans are equal and all of us have the same parents. The only discrimination is there is based upon the righteousness of a person, otherwise, all are equal. The ritual of Hajj is an embodiment of this ayah as during the pilgrimage. There is neither any differentiation nor discrimination on the bases of gender, race, color, ethnicity, social standing and so on, rather each and every one of the pilgrims is a servant of Allah and equal to any of the other in the pilgrimage. Therefore, this unanimous gathering of people from different parts of the world without any discrimination gives the message of equality. Which the world needs the most under present circumstances.

The ritual of Hajj is much more than the just simple set of activities undertaken for religious reward, rather. A greater level Hajj symbolizes much more and in all its acts it carries a universal appeal. If understood and help the world become a better place and give a boost to the image of Islam.