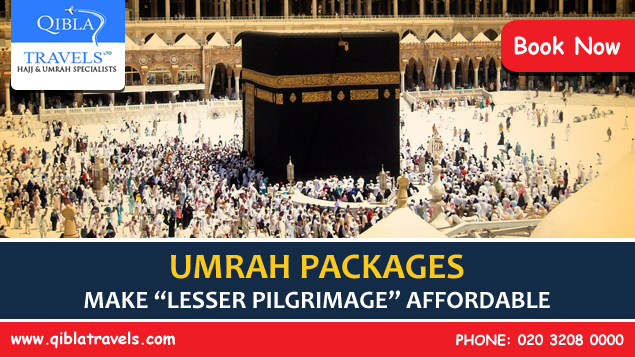 The two pilgrimages that have been given greater significance in Islam are Hajj and Umrah. Hajj is the major pilgrimage and among Islam’s five pillars. It is an obligation for all Muslims and must be performed at least once in a lifetime by those who are physically and financially capable. Umrah is a ‘lesser pilgrimage’. Another major reason behind its importance is that it is the Sunnah of Prophet Muhammad (peace be upon him).

In order to perform the lesser pilgrimage, Muslims living in countries far from the Kingdom of Saudi Arabia have to travel a greater distance from their place of residence to the holy city of Makkah. Today, they can book any of the Umrah packages offered by the tour operators specializing in the Islamic religious tours. Upon booking any of such packages, the prospective pilgrims can make their journey to the holy city easy and affordable.

Such packages have made it easier for Muslims living in the UK to fulfill their sacred intention of performing Umrah. The Muslims of the UK also need to choose the right tour operator while making the comparisons.

Although Umrah packages UK is offered by many of the country’s tour operators, the prospective pilgrims must always choose the one which is authorized by Saudi Arabia’s Hajj Ministry. They can save more on their package by booking it several months in advance. However, the Muslims residing in the UK must decide their departure date and the number of days they would like to spend in the holy city of Makkah before booking. Once the dates have been decided, they can go ahead and book their packages.

While in Makkah, they would get the opportunity to visit some important religious sites after performing their lesser pilgrimage. One of them is the Jabal al-Noor, which is of great significance for all Muslims. It is home to the Cave of Hira, where Prophet Muhammad (peace be upon him) received his first revelation of the Holy Quran. Another sacred mountain is Jabal al-Rahmah, also called Mount Arafat.