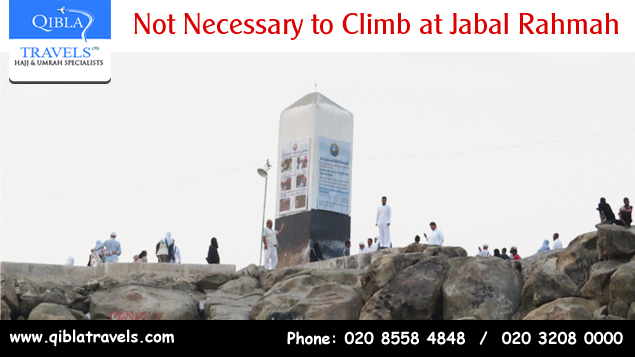 Despite the crush of crowds at Arafat, thousands of pilgrims insist on going up Jabal Rahmah. This erroneous concept among some pilgrims causes overcrowding on the ways to the mount.

So on the ninth day of Dul Hijjah, pilgrims leave Mina for Arafat where they stand in contemplative vigil, pray and recite the Qur’an.

The Civil Defense has warned pilgrims against going up Jabal Al-Rahmah. Civil Defense spokesperson Col. Abdullah Al-Harthi said that the crowd of pilgrims at Jabal Al-Rahmah represents one of the major risks that they are working to avoid on Arafat Day, noting that the Civil Defense will implement preventive measures to reduce the presence of large numbers of pilgrims at the site around the mount in cooperation with other units of public security, the Red Crescent, and other agencies involved with Haj for this year.
Al-Harthi called on Haj service companies to raise awareness among pilgrims to avoid climbing the mount. These companies must clarify that it is not necessary to stand on the top of the mount to complete Haj.
So all pilgrims can stop anywhere on Arafat. It is not necessary to climb Al-Rahmah Mount to complete Haj rituals, according to Haj rules. However, a large number of pilgrims ignore this and insist on going up the mount.
Others pilgrims kiss the white pillar on top of the mount indicating a lack of knowledge. This act has been denounced by Islamic scholars as “bida’a”, or cursed innovation.

Most pilgrims ignore the real purpose of the white pillar on the top of Al-Rahmah Mount. The white pillar which was built to locate this mount in the plain of Arafat.

Qibla Travel offers a wide range of exciting Umrah Packages for Muslim brothers and sisters residing in London, Birmingham, Manchester, and all over the UK. The comfort of our clients is our top priority. So If you are planning for Hajj and Umrah this year, then contact us at for details *020 8558 4848*