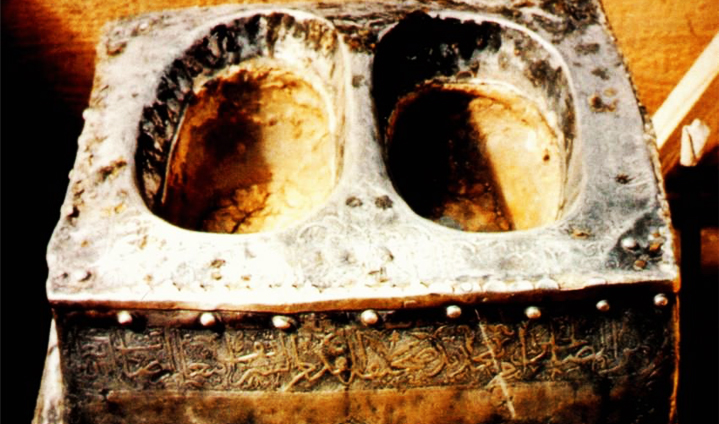 Maqam-e-Ibrahim also was known as the Station of Ibrahim. It is the large stone block on which Hazrat Ibrahim (AS) stood while building the upper walls of the Holy Ka’aba. It is believed that this rock was sent from heaven to Hazrat Ibrahim (AS) along with three other rocks one of which is the Sacred Black Stone, also known as Hijr-e-Aswad. The second one is the rock of the children of Israel and the third one is Maqam-e-Ibrahim.

One of the miracles of Hazrat Ibrahim (A.S), which many of us might be unaware of, is that when He stood on that rock. It became soft and his feet dived into the rock which resulted in making the impression of his feet on the rock.  After several hundred years, those impressions are still on that rock

Sa’eed bin Jubair (RA) reported that the Prophet (PBUH) said: “The stone is the station of Ibrahim. Allah made it soft and made it mercy. Ibrahim would stand on it and Ismail would hand the stones up to him.”

During the Khilafat of Hazrat Umer (RA), he got it moved from the eastern side of holy Ka’aba to the front of Ka’aba just close to the door of the sanctuary. It was done so that the Muslims may not face any difficulty while performing tawaf as it used to come in their way. The present place where it is located now is the place where Hazrat Ibrahim (AS) offered two rakah prayers after finishing the construction of Ka’aba. During Tawaf, at the time of Hajj and Umrah, it is desirable if the Muslims offer two rakah prayers behind Maqam-e-Ibrahim. A person may offer a prayer from a distance so that no trouble is caused to other Muslims performing tawaf. It is mandatory to offer prayer after finishing tawaf or the tawaf will not be accepted.  Allah said in Holy Quran in Surah al-Baqarah:

“Remember We made the house a place of assembly for men and a place of safety, and take ye the station of Abraham as a place of prayer; and We covenanted with Abraham and Isma’il, that they should sanctify. My House for those who compass it round, or use it as a retreat, or bow, or prostrate themselves (therein in prayer).” [2:125]