Can a Person Perform Hajj While in Debt?

What is Zakat? Importance of Charity in Islam

How to Encourage Your Kids to Love and Respect Ramadan? 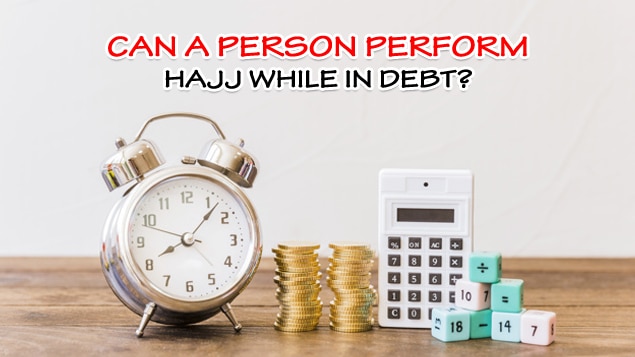 Can We Perform Hajj While in Debt?

Hajj is the fifth pillar of Islam. It is obligatory on all Muslims, at least once in a lifetime, if they have the financially and physically capable to perform Hajj. Allah (SWT) says in the Holy Quran:

And Pilgrimage to the House is incumbent upon men for the sake of Allah, (upon) everyone who is able to undertake the journey to it; and whoever disbelieves, then surely Allah is Self-sufficient, above any need of the worlds. (Aal-e-Imran, Chapter #3, Verse # 97).

Performing Hajj is akin to affordability. It becomes obligatory only when one can afford to perform it. However, it is necessary to fulfill one’s social and familial obligations, before going for Hajj. Islam does not impose Hajj on those who can’t afford it. The people, who have financial liabilities, should pay off them, first. If their financial position is sound enough and their financial commitments do not suffer, they can opt for Hajj.

Perform Hajj While in Debt?.

Ibn Taymiyah (may Allah have mercy on him) said:

“It is permissible for a person who is in debt and facing financial hardship, either because he is unable to earn money or because the creditor is absent and he cannot pay him, to go for Hajj if someone else takes him for Hajj, provided that this does not affect his ability to pay the debt.” Majmoo’ al-Fataawa, 26/16

There is no restriction on performing Hajj if you’re in debt; you have only to make sure the fulfillment of certain conditions. First, a person can go for Hajj, if he has the capacity to pay off his debt on the due date. In case, the creditor has not fixed a date for the payment, his financial position should allow him to settle his accounts when the creditor demands it. Second, the person to whom he has borrowed money is ready to wait further for the payment of a debt. Third, he has also the financial capacity to take care of his family.

Abdullah ibn Amr reported: The Messenger of Allah, peace, and blessings be upon him, said,

“It is enough sin for a man to withhold food from the one whom he is supposed to feed.”

Fourth, the person affords the expenses of his journey and the necessary provision on the way to Makkah. If there is any conflict between fulfilling financial duties and performing Hajj, the better action is to honor commitments first. So you can Perform Hajj While in Debt?.

In today’s world, we have a variety of financial liabilities. There are many forms of loans such as bank loans, credit cards and the loans one takes from individuals. Then there are long term loans such as mortgages and sometimes one takes things on the lease or on installments from banks and other organizations. Moreover, many companies offer their employees advance salary schemes to fulfill their urgent financial needs. Some companies were also run Hajj and Umrah schemes too. Even travel agencies like Qibla Travels, also offer Hajj Packages and Umrah packages on installment. Usually, the employees pay off the number of such loans from their salaries on a long or short term basis.

Can we perform Hajj taking a loan?

In Shariah, there is no restriction of taking money as a loan for Hajj, if the borrower fulfills the essential obligations. All modern forms of loans also come under the same principles of Shariah that we have mentioned above. One must remember, Hajj is obligatory when you are “able to do it”.  If you are able to fulfill your familial commitments and pay off your loan installments on due dates, there is no issue of performing Hajj.

Think of before taking the loan for performing Hajj that you can pay it off easily on the due date. It will not cause any financial worries to you or to your family that depends on you. And the obligation of paying off the loan comes on a feasible date that is affordable for you. If it is difficult for you to pay back the loan or you have nothing left when you return the loan, you must not borrow a loan to perform Hajj.

Instead of taking a loan, you should wait for the time when Allah Almighty blesses you with means to perform Hajj without taking financial support from anyone. While borrowing a loan, you must also be sure that loan should be free of riba (usury). Allah (SWT) prohibits from riba and thus it would be the worst of major sins to take the loan for Hajj that involves riba. If a Muslim does not care for his obligations, it will be severe negligence on his part and his act can displease Allah (SWT).

Packages for Hajj and Umrah: