Blessed Eid-Ul-Adha To All Muslims 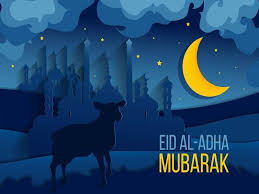 Eid ul ADHA: is a festival celebrated among Muslims world in remembrance of the sacrifice. The Prophet Ibrahim (AS) made out of his faith in Allah (SWT). Ibrahim (AS) showed a willingness readiness to sacrifice his son Ismail (AS) on the command of God but his son was replaced with a ram by Allah (SWT). Allah (SWT) was so pleased with Ibrahim’s (AS) submission to Him. He made this demonstration and full faith in Allah becomes a permanent part of a Muslim’s life. Having complete Hajj Muslims celebrate Eid-ul-Adha. Blessed Eid-ul-Adha to Muslim community all over the world by Qibla Travels.

Allah says in the Quran:

“Their meat will not reach Allah, nor will their blood, but what reaches Him is piety from you. Thus have We subjected them to you that you may glorify Allah for that [to] which He has guided you, and give good tidings to the doers of good.” (Surah Hajj:37)

This festival is meant to make a Muslim more virtuous in his or her deeds. It should not be meant only to offer sacrifices; rather it is meant to learn hidden lessons of freedom from selfish bad desires. Whereas elevating a Muslim from anything that hinders his ability to fulfill his responsibilities as a Muslim. This Eid is mostly celebrated for the first three days. People plan gatherings as a way to celebrate the occasion together with their loved ones.

The Qurbani meat can then divided three equal portions per share; one-third is for you and your family and the second one-third is for friends, and the final third one is to be donated to those in need.